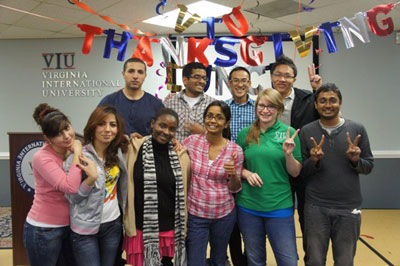 FXUA Vice-President Sue Ann Myers started off the event by sharing a little about the history of the holiday. Thanksgiving is celebrated in the United States and Canada on the fourth Thursday of November (USA) and second Monday of October (Canada). While accounts of when and how the first Thanksgiving occurred vary, it is traditionally a holiday when people give thanks for the things they have. “Now, we give thanks, we eat a large meal and watch football,” Sue Ann laughed. Thanksgiving celebrations had varied in the different United States from the time of our Founding Fathers,until Abraham Lincoln made a proclamation that Thanksgiving was to be celebrated on the same day throughout the United States, de facto making it an official American holiday. 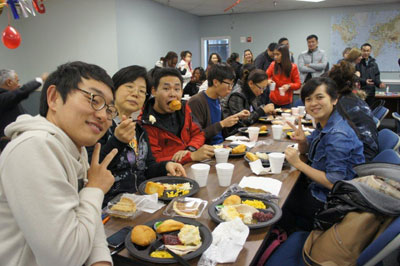 The FXUA community enjoyed a traditional feast of turkey, mashed potatoes, gravy, corn and cranberry sauce with Apple and Pumpkin pies for dessert. Students, staff and faculty alike participated in a fun holiday craft, making outlines of their hands, coloring it with crayons and gluing on multi-colored feathers to make turkeys. Finally, everyone was treated to a great performance from one of our Mongolian students, Enkhbayar Bavaraa, who played guitar and sang a lovely rendition of What a Wonderful World.